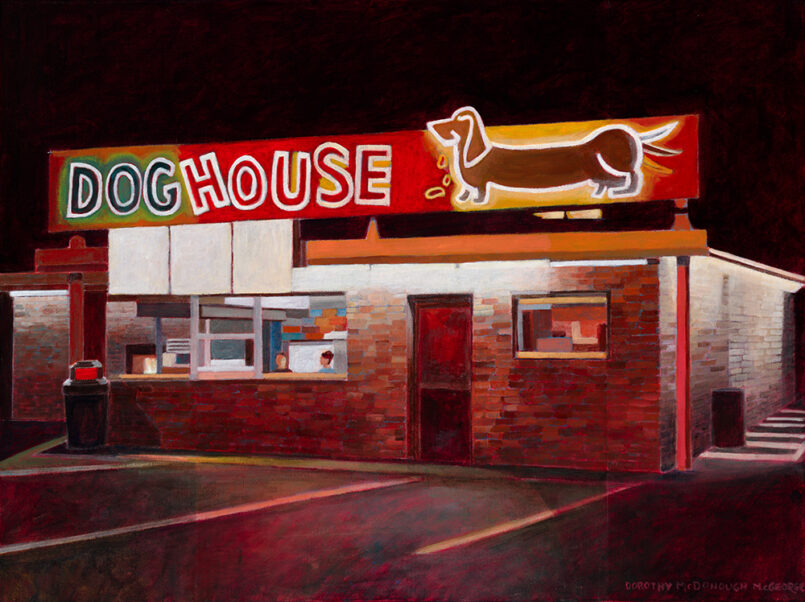 Dorothy McGeorge has most recently returned to the Washington area. Her paintings over the years have chronicled her surroundings from the open plains of Nebraska, the suburbs of Washington, D.C., the urban cityscapes of Montreal, Quebec and most recently the Southwest in New Mexico.

In her thesis, “Monumental Images of the Midwest,” she used Dynamic Symmetry, a classical approach to organizing the picture plane into segments to compel the viewer to share the whole of the image through its parts. The idea of perfect proportions found in nature, supported by mathematical principals, has a direct influence on her work. The University of Nebraska had an impressive staff of highly regarded, regionally and nationally know artists, including painters Dan Howard, James Eisentrager and keith Jacobshagen and printmaker Karen Kunc.

She worked mostly with James Eisentrager who believed strongly in the gestalt principle that we perceive visual data in organized or configured terms and Dynamic Symmetry, a term presented in the 1920s by art theorist Jay Hambridge. These principles can be seen not only in the work of impressionist and post impressionists, but in more contemporary and sometimes abstract work of artists like Richard Diebenkorn and Willem de Kooning.

After receiving her masters, she became an artist with the Hayden Galley in Lincoln, Nebraska which was associated with the Sheldon Memorial Museum of Art. The subject of her work shifted from grain elevators (monumental midwestern images) to smaller local architectural images and familiar city and industrial scenes. When she moved to Washington, D.C. area in1995 she continued supplying the gallery with paintings of Lincoln with local structures until 2005

In 2005 she moved to Montreal Quebec. There she worked from her studio in the Complex du Canal Lachine, in St. Henry. Her work was of the City of Montreal, cityscapes of structures that reflected the character of the place through perspectives that transformed the colors and shapes of surfaces through direct sunlight and shadow. Her work shown mostly there at Espace D’ Art du Canal.

In 2011, she moved to New Mexico, there she chose to paint structures along historic Route 66 which were starting to disappear from the landscape. She showed he work in three different galleries there, the Old Schoolhouse Gallery, the Watermelon Gallery and the Gallery at 400 in Old Town.