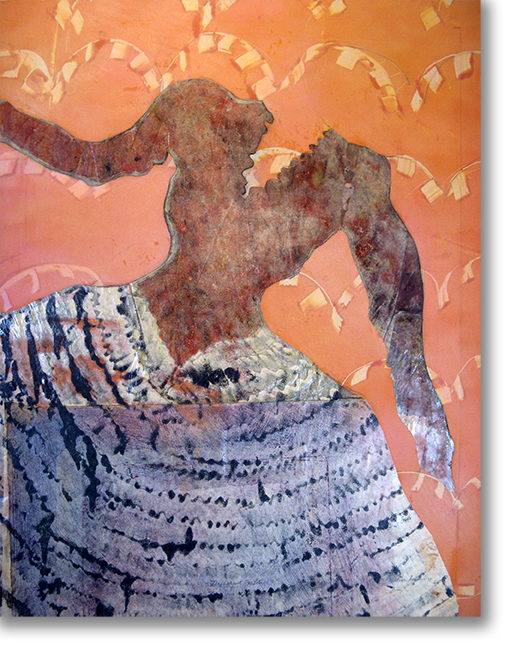 “Family history is the driving force behind much of my art which is layered with powerful undercurrents of connection, loss and renewal, as well as tenderness, humor and humanity.  I avail the full richness of print media to construct poignant narratives aware of my inability to fully grasp the past as I turn history into a visual reality.  While my clothing images are visually fun, many of my prints are quiet, reflective and intimate, confronting the highly charged subjects of personal and cultural memory to please the eye and feed both the soul and mind.”

The hand pulled print has been Pauline Jakobsberg’s method of expression for the past 35 years.  She co-founded the Washington Printmakers Gallery in 1985 and founded the Graphic Workshop, a printmaker’s studio that existed in Silver Spring until 2016.

Pauline’s works are in several private collections around the world and have been widely exhibited in the US and Europe, including two solo exhibitions in the Czech Republic. Her most recent, in 2015, was at the Houston Holocaust Museum where she trained 100 docents prior to her reception.

Pauline gets invited to speak to 5th through 7th graders in public and private schools, introducing WWII and the Holocaust into their history studies. She has also served on college panel discussions, and lectured at adult education programs.

In 2016, she was chosen among eight artists in the Washington, DC area to have her work permanently documented in the ArtCart, Saving the Legacy Archives of Columbia University in NYC.  Several of the works were recently shown at the Katzen Museum.

Pauline lives in the Maryland suburbs of Washington, DC.