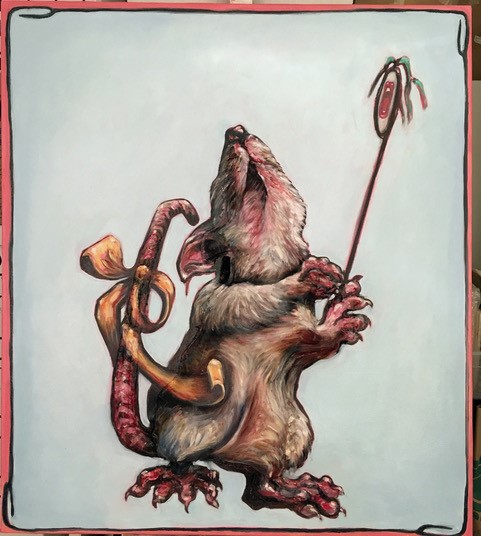 My work involves creating compelling illusions, as most successful two-dimensional work ought to do. I’ve always been inspired by the natural world, most specifically human and animal biological subject matter. Most works don’t copy literally from nature but use the remembered impressions of pieces of researched imagery and automatic drawing processes to build compositions. The Surrealists are obvious inspirations for process and uncommon juxtapositions. Artists like Dorothea Tanning, Max Ernst, Arshile Gorky, Frida Khalo and Rene Magritte were early influences. Later a fascination with Philip Guston for his bold and primitive use of line as well what I interpret as his ability to strip life down to the barest essentials. Maybe not the essentials we are looking for but what I took from Guston’s paintings of piles of shoes, bare light bulbs hanging in space, stubby cigarettes, etc. were a blunt and direct confrontation with life and death. These ideas I connect with as I see art as a life force in and of itself and perhaps a connection with an intangible world no one can explain.

Current work builds on unexplainable worlds by attempting to put these thoughts into reality with works on paper that layer imagery with transparent ink washes and obvious strong line that depict animals and other three dimensional ordinary things like cars and furniture. Shadows are painted into the works to insist on the viewer suspending their disbelief and “getting into” the work, while at the same time I have cut out and bent the paper so it will throw hard shadows and present itself as an object. I’m looking, in vain I know, for the 4th dimension.

Subject matter takes the idea of life, death and continuity into hard science, albeit in a simple way, as many of the animals placed in these compositions are endangered, extinct or descendants of one or more of the other animals in the work. Falling into the illusions of these works and reading the lists of animals described may reach the viewer on multiple levels. I would hope a viewer would not be able to describe what the paintings are about, no matter how hard they try. Fascination with the unexplainable goes on forever.