Steven Kenny was born in Peekskill, New York in 1962.  He attended the Rhode Island School of Design, receiving a Bachelor of Fine Arts degree in 1984.  His final year of art school was spent studying independently in Rome.  This direct exposure to European art (especially the Baroque works of the Italian, Dutch and Flemish schools) had a significant effect on his painting style.

In 1997 Steven turned away from illustration in order to devote his full attention to the fine arts.  Since that time he has lived in the Blue Ridge Mountains of Virginia and his home state of New York before settling in St Petersburg, Florida.  His award-winning paintings are exhibited in galleries across the United States and Europe.  Honors include grants from the Virginia and Franz Bader Fund, the Joyce Dutka Arts Foundation, and fellowships from the Virginia Commission for the Arts and the Virginia Center for the Creative Arts.

From an early age the beauty and mystery of nature have deeply influenced his chosen subject matter: compositions that most often combine the human figure with elements from  nature to comment on our interactions with the environment 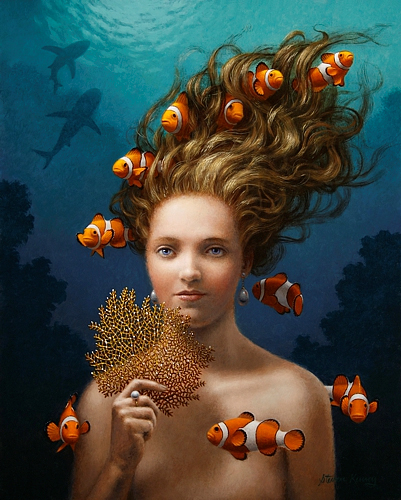 while symbolically alluding to the dynamics of human nature in general.

My paintings most often focus on the human figure paired with elements found in nature.  These surreal, symbolic juxtapositions are intended to work on at least two levels.

The first alludes to the fact that we are an integral part of the natural world and subject to its laws.  This seems like an obvious statement until we step back and objectively assess our symbiotic relationship with each other and the Earth.  Depending on your perspective, these relationships fall somewhere on the scale between harmonious and dysfunctional.

The second turns the lens around to look inward upon the stewardship of our own emotional, intellectual and psychological landscapes.  The same pictorial subject matter allows me to make references to our individual journeys of self-exploration and discovery.  Again, depending on who is holding the compass, we are either lost or on the right path.

At the very least, I desire to create images of beauty and mystery that allow the viewer to find their own personal significance in them.