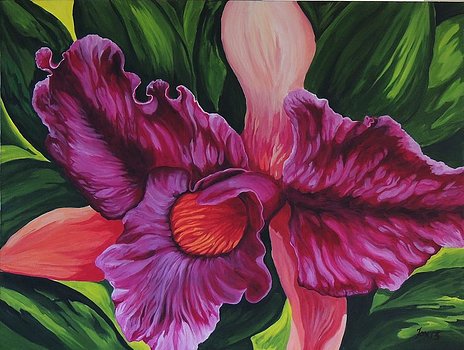 Sharon Fox-Mould is a Past President of The Jamaica Guild of Artists and a proponent of the philosophy that artists working in community will build strong technical skills, strengthen their concepts and product delivery. A graduate of The State University of New York, Sharon double majored in Psychology and English. After living in the United States for 15 years and pursuing a career in administration and education she reacquainted myself with my Jamaican roots and began painting the flora of Jamaica. She has never given up her passion in life for painting.  Sharon’s chosen medium is acrylic on canvas but she often strays to furniture and walls.

“The many Jamaican artists before me who illuminated the richness of Jamaican life and light inspire me. Painting gives me the opportunity to share with you all that is beautiful. The interplay of colors that is nature, challenges me to devise ways to capture it on canvas. If you were to ask me what segment of any composition most interests me I would have to say color and light. Each painting represents first color and light followed by my love for gardening and the unusual flowers of the tropics.”

Sharon Fox-Mould has participated in many exhibitions mounted by the Jamaica Guild of Artists. As a guest of the National Museum and Art Gallery of Trinidad and Tobago and the Mayor of Port of Spain, she exhibited in “Celebration of Jamaican Art Exhibition”, which marked the anniversary of the twinning of the cities of Port of Spain, Trinidad and Kingston, Jamaica. Her paintings joined those of esteemed African American artists at the National Black Fine Art Show at the Puch Center in New York City. Sharon has also participated in the Columbia Arts Festival in Columbia Maryland as an invited artist. Her work is widely collected by individuals and corporations in Jamaica, United States and Canada, especially notable is the prestigious Pehl Collection in Eldersberg, MD, the Vincent D’Aguliar Collection in Nassua, Bahamas, and The Bank of Jamaica Collection.

Sharon Fox-Mould has served as Chairperson for the Management Committee of Visual and Performing Arts Jamaica (an EU backed cluster) Sharon, along with many leaders of the creative industries lobby and advocate for change. Her role in the creative industries is further highlighted by my participation in Jamaica Art Management Services. She wrote the proposal on behalf of the Guild who won a Caribbean Export Development Agency (CEDA) grant which documented thirty professional artists and created tax compliance status. For the first time in Jamaica Sharon was able use intellectual property of two artists as collateral for a loan. “I will continue to use my administrative skills to build on the legacy of my predecessors in promoting the richness that is Jamaican art. For me it’s really simple I enjoy creating pleasing, colorful, pieces.”

OFFICE HOURS:
10AM – 4PM Tuesday-Friday
Saturday 10AM – 4PM
Sunday/Monday by Chance or Appointment

Artists & Makers Studios 2 is no longer at Wilkins Avenue.
Stay tuned for a new and exciting location!