Ric Garcia is a Cuban-American artist working and exhibiting in the DC metro area. He is a painter and digital print maker. When asked about his work, Garcia has said, “I like to make ordinarily nice ideas into extraordinarily cool ones”.

Ric’s work is inspired by the cultural mash-up of his adolescence and an exploration of his cultural identity as both distinct and blended. He also considers his work as a process of finding a visual common ground to present imagery unique to his bi-cultural experience. An example of this is the painting  titled Goya Star. The painting represents a real Latino consumer product but the phrasing on the label and artwork are changed to create a hybrid fusion between a Goya black bean can and a Campbell’s soup can. Garcia, when speaking at length about his work says, “My choice to produce a body of work with Latino products as subjects made sense for me. I also wanted to represent more than the product alone…One of the ways I think of my work is as a still life or portrait, so the subject is placed in a environmental or emotional context. My work is less about representing the product and more about eliciting emotional reactions or 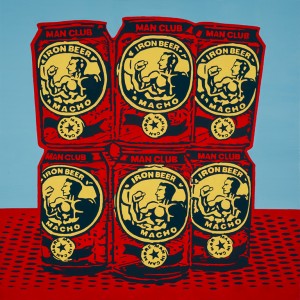 encouraging questions from the viewer.”

His work builds on the legacy pop art, as he has stated, “I chose to work in this style, first for its place in art history as an American art form and second for it’s immediacy, power, and flexibility to convey ideas. My version of this style is more distressed and with an urban graphic aesthetic.” His process involves both traditional and digital techniques and he has recently described it as “… I’ll sketch to establish a basic visual direction and then move into a digital environment to produce several studies for composition and color. I’ll use reference material from photos I’ve taken or images harvested from magazines and the internet. While creating the studies I’ll decide which medium to produce the work. Sometimes the choice is to produce the work as both a print and a painting. I regularly incorporate a few image conventions into the work such as stars and benday dots to energize the composition and suggest material or atmospheric texture in my work.”

Ric earned a BFA in graphic design and illustration from the University of Miami and is employed by the Smithsonian Institution as a visual designer. His work is in many private and public collections. Most recently his work has been added to the DC Commission on the Arts and Humanities Art Bank collection and the Arts and Cultural Heritage Division of The Maryland-National Capital Park and Planning Commission, Prince George’s County, Maryland collection.