Marie Ringwald’s sculptures and works on paper are inspired by everyday, simply made buildings that are designed for working in or for holding materials, animals and products.  Her images are based on warehouses, barns, sheds, stores and vernacular architecture like Quonset huts.  She sketches and photographs during her travels.  She starts by remembering a place and then abstracting essentials that – to her – evoke a personal, clear but universal memory.  She works with wood, rubber, glass and sheet metal – the same construction materials that make up the buildings that inspire her.  The constructions and works on paper range from recognizable imagery to the more abstract.

Born, raised and educated in the Bronx, New York, Ringwald earned an MFA from Hunter College, City University of New York, 1970.  After a year of  graduate studies at the Tyler School of Art, Temple University, Philadelphia PA, she 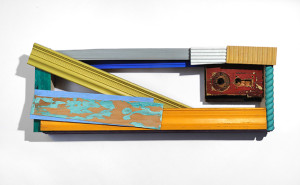 moved to Washington, DC where she started working and showing with a group of women artists.  She began teaching at the Corcoran College of Art + Design in 1976 where she became a full Professor of Art in 1992.  She served as  Chairman of the Foundation Department for the a total of ten years.  She stopped teaching in 2003 in order to work full time in her studio.

Ringwald had her first solo shows in 1977 and has shown locally as well as throughout the United States.  The U.S. Department of State Art in Embassies Program has exhibited her sculptures in South America and Europe.  Her work has been carried by galleries in NC, MD, VA and DC, and shown in museums in DC, AK and WV.  She has works in the collections of DC Art Bank; the Huntington Museum of Art, WV; the Wilson Building Art Collection, DC; Kaiser Permanente, VA; Fannie Mae; and The Washington Post among others, as well as in private collections in the Netherlands, Germany, Peru, Canada, Mexico, and throughout the United States.

Since 1977, Ringwald’s studio has been housed in a post civil war brick building in the Shaw neighborhood of Washington, DC.