Judith Pratt is an assemblage and installation artist whose work incorporates a wide range of materials including aluminum, plasterer’s tools, roofing materials, fabric, synthetic polymer paint, graphite, paper, and rope, to name a few.  A signature feature of her work is her commitment to push beyond the traditional boundaries of painting, drawing, and sculpture.  As a result of this effort, a hybrid genre emerges which is carefully crafted and theatrically staged.  Pratt comments, “I aim for my work to be more than descriptive, theoretical, or object-driven.  Ultimately, I want the assemblages and installations to have a dynamic impact on the viewer.  I want to create a spark of recognition that says something particular and relevant about our postmodern times.”

Residencies have provided Pratt with important periods of experimentation to realize her goals.  In 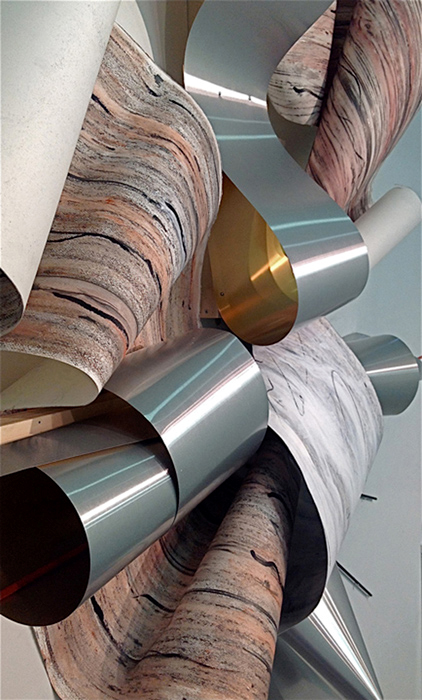 2012, she was awarded a month-long Fellowship at the Virginia Center for the Creative Arts.  During the summer of 2013, she was selected to join the University of Virginia’s Mountain Lake Biological Station, working with a wide range of scientists and international artists to explore the connections between their disciplines.  She also was awarded a VCCA-France Fellowship in October 2014 to Auvillar, France.  As a result of her time spent at VCCA and VCCA-France, Pratt co-founded an artist-run alliance called The AXIS Group, a thirteen member multidisciplinary group of VCCA Fellows who exhibited their work at D.C. area’s Brentwood Arts Exchange in September 2014.  Forthcoming AXIS 2 exhibition plans are currently underway.

Pratt holds an MFA in Painting from American University, and an MA in Modern and Contemporary Art History, Connoisseurship, and History of the Art Market from Christie’s Education, New York.  While in New York, she served as curatorial assistant at the Morgan Library and Museum under Curator Emerita Cara Denison and Curator of Contemporary Art Isabelle Dervaux.  Her work has most recently been featured in shows at D.C.’s Hillyer Art Space, the Workhouse Arts Center, and Brentwood Arts Exchange.  She has received reviews in ARTNEWS, The Washington Post, and The Washington Times.  Pratt maintains studios in the Washington, D.C. and Charlottesville areas.