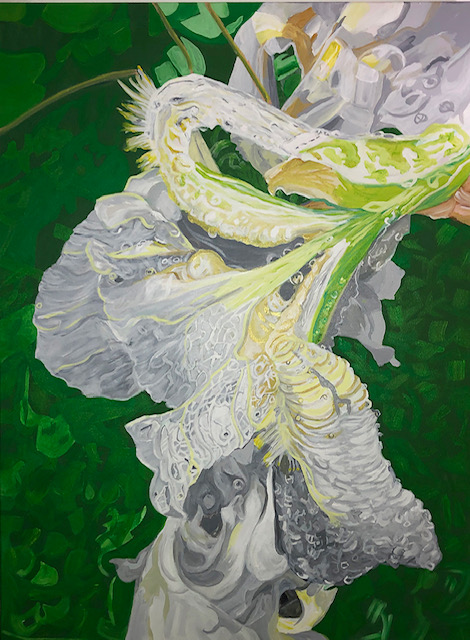 Jamie Downs has been painting for over forty years.  For most of the time, her work has been a non-objective Jungian search of the collective unconscious; but 15 years ago it took an unexpected turn.  Very large close-up images of flowers became a part of the mixed media paintings, and that began a new direction and inspired some new work for this artist who works in series.

As a very young child Jamie was obsessed with birds – playing bird and drawing birds.  What would thirty plus years of abstract expressionist style work do to her paintings of birds?  That exploration would become a fun adventure which would expand to animals as well.

Like most artists, Jamie has had other day jobs throughout her life.  Her work as a newspaper photographer, graphic designer and web designer, arts administrator, curator, gallery operator… has provided skill sets that have become a part of her creative process.  The inspiration for several of her birds and animals comes from scanned black and white negatives from her time as a photojournalist.  Other paintings are derived from her huge collection of photographs from family trips to zoos across the US or vacations in Central America.

Her process often begins as digital and is rarely shown at that stage.  The final work on canvas or Mylar is several steps removed from this initial digital creation.  Her mixed media paintings reflect her love of materials and techniques.  Beginning with watercolor, colored pencil, water based crayon and markers, she progresses through acrylics and inks to Sennelier oil pastels and sometimes oils, using numerous mediums, metallics, glazes, pigments…producing multiple, though subtle, textures.   Layers of the process are often preserved, color field style, on the edges of the painting or in line elements.  Her colors are pure, bright and bold.

Her current series is birds and animals representing each letter of the alphabet.

Jamie’s studio is in Silver Spring, MD and is open by appointment.  She has shown through galleries throughout the Mid-Atlantic and is widely represented on-line.