Gina Louthian-Stanley is a Roanoke County, Virginia native.  You can find her working in her studio most evenings and in the wee hours of the morning.  She was born into an artistic family and was influenced by many artist and musician friends and mentors.

Discovering art at an early age, Gina continued her artistic journey in the arts from early adulthood into college.  Louthian-Stanley created her thesis works in monotype and has primarily been a monotype printmaker since 1986.  While printmaking is her forte, her most recent works are explorations in combining printing, painting and mixing media on alternative surfaces with various inks, oils, solvents, hot wax (Encaustic) and cold wax using various techniques to create the ‘atmospheric’ quality, which are symbolic to her works.   Each work usually begins without a preconceived image.  It begins with a series of random colors and textures, then adding marks and images, often with the use of her hands.   Stanley’s works represent the physical and emotional sensations, which carry the viewer into an intimate visual narrative.

Louthian-Stanley pursued an interest in continuing her creative endeavors and earned her B.A. 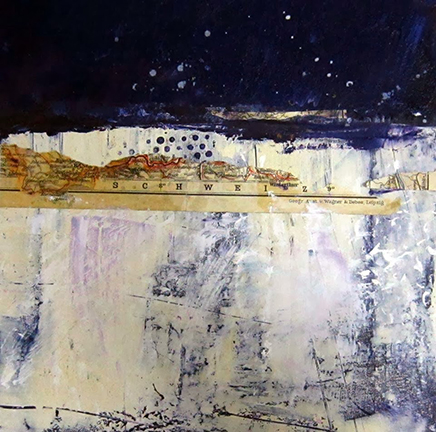 Degree from Hollins University, followed by a Master’s Degree from Radford University.  She has received many artistic honors and awards, has been featured in several publications, and has artworks in corporate and private collections locally, nationally, and internationally.

In my work, I utilize various color harmonies and surface textures to visually engage the audience.  I also explore the range of possibilities allowed through subtle changes color choice, composition, method of application, surface preparation, etc.  I choose not to create mundane imagery and defend it with dense jargon.  I believe that a painting is not made with theory alone, the materials are also a vital component.  I am inspired by building up from a simple base structure and self-organize as I go.  I render this into painting by building off of the random, using a predetermined medium, technique, and series of colors.