You’d think that after almost sixty years on the planet, I would handle things like taxes, the business side of art or an artist bio like something approaching an adult, instead of the kid at the table being told to finish that mound of congealing cauliflower and melty cheese, that tasted wrong from the first bite…and later that night surfaced like golden, chunky napalm.

Up until the late 1960s, I was a normal airplane and army-man drawing kid.  Then there was the library’s ad in Life Magazine (I bet) that I remember looking at and, like really good psycho-pharmaceuticals taking effect (again, I bet),  realized…this was allowed.  Permission to step through a door I didn’t realize was there.  It was a Peter Max image, super stylized winged guy  flying across the sky above a landscape, pastels and bright colors.  “Picture yourself…tangerine trees…marmalade 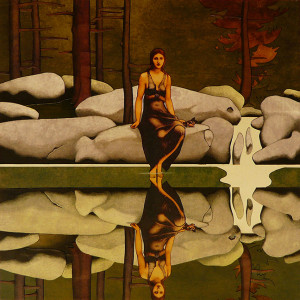 skies…”.  A few years later, Yes released “Fragile” and the album art by Roger Dean  ensured my condition was permanent.  School? School was nine tenths social experiment (not particularly successful), but I learned one thing.  The work I did in classrooms had almost nothing to do with the art I went home and made (freaked out my teachers).  Weirdly, still holds true.  I participate  in drawing  marathons, come home and those drawings contribute almost nothing to future projects.

I am having an inner argument with myself that isn’t always particularly civil, about whether you can have multiple influences, reference and borrow from those influences, and still say you’re making original art.  And there are many influences- the Vienna Secession, the golden age illustrators, particularly John Bauer, many others and of course, Roger Dean…I consider my major strength to be drawing, something I can’t honestly say I love doing, but when I’m doing it, I feel like I’m doing what I’m supposed to be doing.  Imagine my conflict when my collages sell better and get into more shows. I really enjoying re-imagining and juxtaposing images, but it’s a little disheartening when the work you do that’s best received relies on other artist’s work. The kinder bits of myself tell me to roll with it, but my inner bully/critic just sneers at what he sees as a lack of originality… but I feel and see that  lack everywhere.  Art that’s cliché.  Music that brings out my Dad’s voice, “Turn that crap down! It all sounds the same!”  I start to feel that really, “original” is impossible- some part of whatever’s “new” has been done, seen, heard before.  Except, for those wow! moments when somebody creates something that’s brilliantly  composed, or demonstrates tremendous skill, or both, even, maybe.  It might even sink in that I’m looking at a beautiful watercolor of a bird… and birds have been drawn a million times before…and it’s just that this has….something that sets it apart.

Permission granted to continue.   (note to self) Find that something.