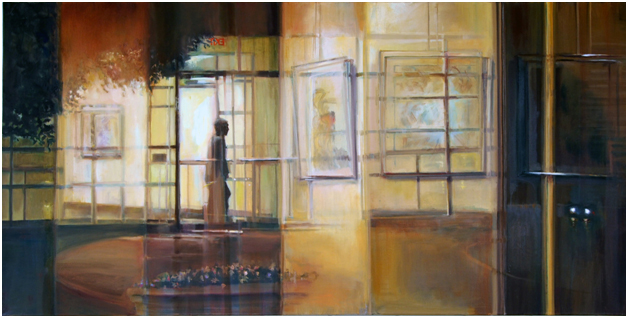 Cathy Abramson’s recent urban paintings are inspired by her photos of everyday events: sitting at a lunch counter; getting a watch repaired; having a cup of coffee. She paints images from the world around her.  Her work explores the mysterious, temporary, and incongruous nature of chance encounters in the urban environment. The viewer is pulled into the painting as though witnessing an event. There is usually a subtext to her paintings and the more the viewer examines a painting, the more it reveals about what lies beneath the surface.

After graduating from SUNY at Stony Brook and The University of Texas Health Sciences Center at Dallas, she had a successful career working as an art director at a local government contracting firm, art directing a political magazine, illustrating books for children and adults and co-owning a local graphic design firm. She also taught throughout Maryland as an Artist-in-Residence for the Maryland State Arts Council.

Cathy studied at the Yellow Barn Studio is now at the Glen Kessler Atelier in Rockville.  She has been exhibiting her work since 1999 in galleries including invitational shows in New York City, local juried shows, and internationally at Than Mór Art Museum, Nyíracsád, Hungary.  She has won several painting awards and has received favorable reviews in local newspapers as well as feature articles in magazines.